Quantum Computing is a project in Universal Paperclips.

Quantum Computing allows you to get bonus operations by clicking the "Compute" button. It becomes available to research once you have 5 processors. The research itself costs 10,000 ops, however computations are only allowed once you have a Photonic Chip. The first chip costs an additional 10,000 ops, so Quantum Computing effectively costs 20,000 ops before it becomes useful.

You get bonus operations each time you press "Compute", but be cautious: the bonus value can be negative. Each photonic chip will cycle between white and black. When individual chips are black, they will generate positive ops; white chips will generate negative ops. If your set of chips is more white than black, the net will be negative and you will lose ops. Each chip's value varies as a sine function, with earlier chips having a longer period. The entire set of chips will cycle in approximately 62.8 seconds (2π * 10 seconds).

If you reach -10,000 ops, you will have the option to reset the game by researching Quantum Temporal Reversion.

It is possible to go over your maximum operations by generating positive computations when you are already at your maximum operations. The rate of operation accrual after passing maximum is heavily damped (1/5 as much as normal) and it becomes difficult to exceed the maximum by a large amount. Additionally, the overage will begin to decay after about 10 seconds.

The amount of ops you will gain is based on the amount of dark vs light photonic chips; the darker the chip, the higher the yield.

Each Photonic Chip slot counts against the total - a fully "black" chip and a fully "white" chip will effectively cancel each other out.

The formula for point gain at any time: 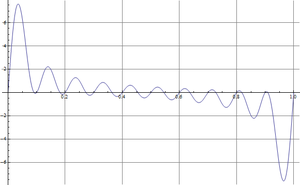 plot of quantum computing bonus when there are 10 chips

When you have enough Photonic Chips it may be hard to determine the "average" darkness. However by clicking twice in succession you can determine if ops are going up or down and use this to your advantage - if the numbers are positive and going up, click as rapidly as possible until it reaches the max, continue as it goes down, and stop when it gets close to zero. This will give you the most positive operations.

The best times to start clicking are as follows

Overage is most effective used in two ways:

You can click a lot faster by clicking once on the button, then hitting the space bar for subsequent "clicks", eg by drumming your fingers on the spacebar. You can also simply hold down the enter key, and your keyboard driver's key repeat mechanism will produce a lot of clicks. Or you can use an autoclicker.

In the early stages of the game you can generate quite a lot with a single chip, if you find it difficult to follow the later patterns. Because it is never in conflict with a faded chip, it is easier to tell when to maximize your efforts.